Cleveland comes to the PoolDawg family all the way from Sweet Home Alabama where he just crushed it over at Troy University (no, he doesn't know DeMarcus Ware even though they went to the same school). 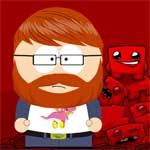 When he's not helping loyal PoolDawgians find the perfect pool cue or billiards accessories, writing product descriptions or learning the mystic art of online marketing, he'll likely be arguing with Mike about the merits of indie games like Super Meat Boy (the weird red dude in his background picture) and Hotline Miami versus the awesomeness of big budget console games like Dying Light and Dead Island.

Best of all though?  The beard!  We tried to do it justice with his South Park toon, but it really has to be seen in person to be believed (perhaps at APA Nationals in August...).  Seriously, if there was a Beard Aficionado Magazine, he'd rock the cover every month.  We're pretty sure at this point his beard is growing a beard.  He hasn't leveled it up to "The Gandalf" yet, but give him time.  Give him time.