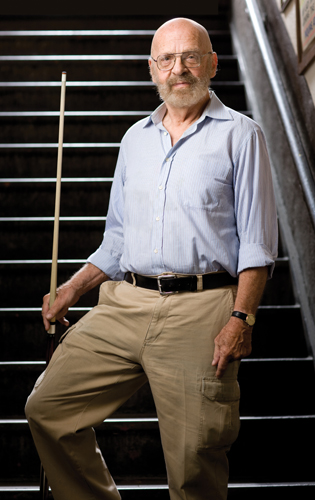 1. If you use a separate cue for breaking, think about using a lighter cue instead of a heavier one. Sounds like the opposite of what you'd want (Bill Incardona used to have a break cue that weighed 26 oz.!), but a number of top players prefer the improved hand speed available with a cue that weighs a few ounces less, perhaps as light as 17 oz.
2. Plan your bank shots, and their aiming, to the extent of deciding what side you'd prefer to miss the shot on if you must miss at all. (Long diagonal cross-corner banks, for instance, should be missed on the short side rather than the long, for defensive purposes.)
3. If your kick shots don't include a plan for which side of the object ball is best to hit, you are one plump, juicy pigeon waiting for a peregrine falcon to strike.
4. When playing a combination shot on a hanger, and that hanger is any ball but the 9, try to keep the first object ball from grazing the rail on the way in. It greatly increases your chances of leaving the first ball in front of the same pocket, and enhances cue ball control.
5. If you're trying to hook your opponent behind an object ball or mini-cluster that's currently unplayable, try to nudge it into playability with the cue ball at the same time you complete your snooker.
6. Similarly to #5, if you're trying a hook and there's an unplayable ball or mini-cluster somewhere else on the table, try and send the object ball you contact into that trouble spot to rearrange things. You want those balls playable if you should be rewarded with ball-in-hand.
7. You must master the shot that cuts a ball along or nearly parallel to a short rail and brings the cue ball out of there using two rails with low outside English. Practice this one at all speeds and angles, especially when you need to go end-to-end.
8. A cue ball coming off one or more rails and crossing the table's exact center cannot possibly scratch - something to remember in selecting cue-ball paths for position when there's distance between the required balls.
9. Those jacked-up, end-rail-to-end-rail highlight-film shots do bring down the house and earn you a relative few seconds' worth of your peers' admiration - but there's almost always something smarter to do.
10. You really should know this one already: Learn to aim your shots to carom off the exposed pocket jaw, not to "split the hole." You'll make more shots and enjoy increased cue-ball options. (The only time you should be aiming for the center of the pocket is when the object ball lies in the "funnel" formed by the extended lines of the two pocket jaws.
Click Here for Part 4...