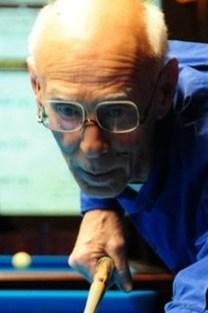 1. When you're conflicted over which of two moves to choose, pick the more conservative one. I'd say you'll be right close to 75 percent of the time.
2. The entire game of one-pocket resides in the cue ball and nowhere else. I'll gladly forgive you for missing a relatively easy shot into your own pocket as long as you leave the other player safe.
3. Any time you're banking towards your own pocket, do what you can to see that the object ball comes to rest on the short rail if you miss. There's no return bank from there.
4. In responding to your opponent's break, frequently there will be an open ball on your side quite close to the corner of the rack. Be alert for billiards, or what I call "split shots."
5. On long straight-back banks, especially in endgame, the desired destination for the cue ball is not only the end rail, but also no closer to your opponent's side of the table than the middle of that rail. Farther over than that, and you're at risk of leaving a makable bank yourself.
6. In breaking, the cue ball should have more sidespin than follow at the point of object-ball impact.
7. By all means learn the diamond system, at least the basic "Corner = 5" one. Multi-rail kicks can extricate you from some hideous traps, starting right with the game's breaks.
8. If you're contemplating a long bank where the object ball is at least one ball's width from a short rail, and cue-ball control seems to be a problem, think about a kick instead. You sacrifice some accuracy, but it's much easier to kill the cue ball - and remember, it's the cue ball, not the object ball, that's paramount.
9. If a shot is absolutely straight-in to your opponent's pocket, that's a sign that the ball can be banked into yours with no danger of a kiss.
10. Cross-over bank shots introduce spin to the object ball because of the cue ball's direction, not what you put on it. Unless you absolutely need English on such a shot, don't make things any harder on yourself.
Click Here for Part 5...