The Two Types of Pool Players 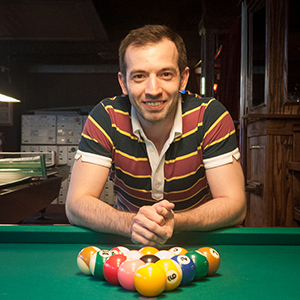 In past articles we discussed feelings that come over us when we have lost a match before it ever begins. Now we must turn our attention to situations that cause our game to turn against itself, among them are overthinking (about the wrong things). In order to cultivate winning, we must do much more than go through the mechanics of playing well. We must train our mental selves for the fight ahead; that is, we must change our goals from “winning” to something else entirely.

The Two Types of Players in Pool:
Let’s discuss two basic types of players in pool, who can be further divided, but here is the gist: 1) those who lack a conscience when playing and 2) the conscientious player. If you are still reading this, you are probably number 2.
You know the differences. There are the players without conscience, whose character is always questionable, who do not represent the game well, who engage in poor sportsmanship, perhaps different types of sharking, and who take advantage of people in different ways on and off the table but who seem to win again and again.—and, of course, who do not feel any guilt for their unseemly treatment of others. Then there is the conscientious player—in this player you will see sportsmanship, good manners on and off the table, a very hard work ethic, and in the really good ones, an uncanny ability to focus to a “zen” state of mind.


You should not mistake the conscientious player for the weaker player; often it is harder for this player to learn how to win because he is too aware of his experiences and thus dissects their meaning to bits. But when he or she does learn to win, this player is extraordinarily dangerous and consistent. But getting to this point takes much effort. The first part of this effort is focusing on the right things: among them, perhaps surprisingly, is not winning.

1. Players Without a Conscience
Players without consciences never worry about their reputation, how they will be seen if they lose this match or to that person. They also always feel entitled to win, and if they don’t, it is the fault of “bad rolls,” the table’s imperfections, the way the balls are racking, and any other excuses that can be thought up. It is never because his opponent played well and deserved to win. There is a great protection in this type of “unconscious” thinking and blaming: the mind acts as a carnivore on a field, whose only inclination is to kill. Nothing is ever his fault; of course his opponent should not win; of course he is the “best” player; and if he doesn’t win, of course he did nothing to deserve it. The protection from this way of thinking (or, really, not thinking) is that this player is rarely intimidated. He feels victorious before the match ever begins, feels deserving of the win, and thus has a far higher success rate at plowing through people who do not have this automatic narcissistic protection. (When the armor breaks, however, this player can also rarely recover—the subject of another article to come.)

2. The Player With a Conscience
Now for the conscientious player. This player is keenly aware of who he is, how he feels, and routinely weighs odds and examines his playing abilities on any given day. He makes adjustments for this or that—a strength, yes, but also a weakness due to an oversensitive awareness. If things should begin to go wrong, too many calculations are made and over adjustments implemented so that his playing eventually feels entirely foreign to him. The situation moves from bad to worse, and a loss becomes only inevitable. But this is because the conscientious player often focuses on the wrong things.

If Not on “Winning,” What, Then, Should Be the Focus?
I’ve talked to many world champions who are conscientious players, and the one thing they say, over and over, is to focus. On what? I asked. Focus on exactly one shot at a time (of course you plan several shots ahead, but your total focus is on pocketing the next ball and getting the cue ball from point A to point B.) Focus on lining up before you ever get down on the ball, on aiming, on feeling comfortable while down on the shot. Focus on having a loose grip on the cue so as not to tighten from nerves. Then focus on the follow-through, on staying down on the shot and on keeping your body in correct form. And if something goes not as planned, do not get angry. It is just another shot, just another situation that requires your attention, your total focus. Do not worry what a person will say if you miss; nobody will care in two weeks or one year, or, for that matter, in ten minutes. They do not deserve to be inside your head. And often, what you think other people are thinking is wrong. Eventually, a rhythm forms, and you will not require so much conscious attention (it is sort of like driving a car to a destination but not remembering the driving itself—your unconscious mind will begin to take over), but until this rhythm forms (and in some matches, it never really forms because the day is simply difficult), you will need this focus to get you there.

Essentially, you go through the motions with total concentration in order to cultivate a “zen” state where the only thing that matters is you and the game in front of you. You are to immerse yourself into that world entirely and, to some degree, lose awareness of everything else around you. While you are in your chair, focus on breathing. Pick out a spot on the table and stare at it while your opponent plays; don’t allow your eyes to wander; don’t look at who’s in the room watching or talking—lose yourself in your moment of zen. Demand focus. When it is your turn, get up and play, one ball at a time. Just you and the table.


Winning, then, becomes a byproduct, a symptom, of this focus. Winning simply comes as you learn to enjoy the game again, to feel your stroke, to become aware of your body as it walks around and examines the angles, your hand as it touches the felt and forms a bridge. Your total focus is on the moment, that one shot, and on nothing more, not who is watching, not the person you’re playing, not the consequences of losing or winning—but that one shot is all that matters.


Keep in mind, you don’t deserve to win. But if you want to win more often than you do now, you have to make the game your temple. You have to find meaning in the moment of having the privilege of playing this game that you so deeply love. Beyond winning, that is what matters. Find meaning in what you do—strive to improve your concentration, your ball-pocketing ability, your attitude when you don’t get your way. Only then can you ever be deserving of anything. The game is the teacher; you are the student. That’s the way it works, and that’s why you’re there. Winning will come; don’t discount all the lessons, all the enjoyment, along the way.


Conscientious players may not win as often or as easily as those without a conscience, but they will find a far deeper appreciation for learning, improving, and simply “being” in the moment.
If you want to watch this type of focus in action, I’d recommend three players as perfect examples: Ralf Souquet, Thorsten Hohmann, and of course my childhood hero, Nick Varner. Their abilities to cultivate zen and to be extremely dangerous are unmatched in the realm of the conscientious. Good luck out there.