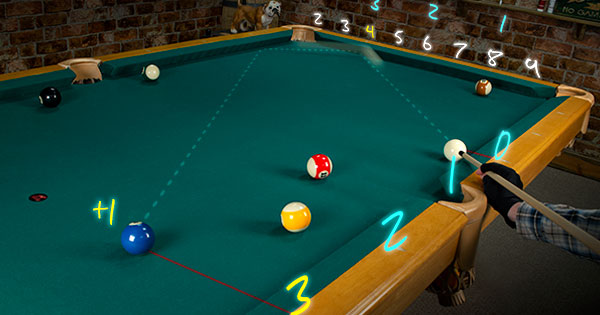 I frequently get asked what my favorite kicking system is. For me, it is always the two rail kicking system that a fellow pro player, John Gabriel from Oklahoma, taught me. The reason this is one of my favorites is because once you figure out your stroke, the rest is simple math that's easy to figure out during the heat of battle.

To start with you need to calibrate your stroke. Everyone strokes the ball a little different, so you need to find the speed and spin that you will use when applying this kicking system. To find your stroke, start with the cue ball sitting in the side pocket. Shoot THROUGH the first diamond down from the far corner pocket. Start with one tip of top spin and one tip of running English (the direction the ball is traveling naturally) using a medium-firm hit.

Calibrating Your Stroke for the Two Rail Kick System

The object is to hit two rails and scratch the cue ball in the corner pocket. You may need to tweak the amount of spin or the speed to calibrate your stroke but once you can consistently do this shot you have found your baseline for executing the two rail system.

The image above shows how we lay out the numbers that we will use for the system. There are a set of numbers on the short rail and these numbers are always the same. Starting in the far corner pocket (2) and moving in half diamond increments down the rail.

Now what if the object ball is not on the rail? Well, this next example shows a scenario where that is just what our opponent has left us. You will start at the cue ball and count the segments to the object ball. This time you ADD the distanced the objects ball is from the rail. In this case, it is sitting one diamond away from the rail. So our number is four. Just like before, shoot THROUGH the number four on the end rail with our good stroke using the same speed and spin. You should travel two rails and pocket the object ball.

Here we have a different variation, this time the cue ball is away from the rail. No problem! Again start at zero (the cue ball) and count the diamond segments to the object ball. In this case, we are four segments away, now you must SUBTRACT the cue ball's distance from the side rail. The cue ball is sitting one diamond away from the rail, so four minus one equals three. Shoot THROUGH the number three on the end rail with the same speed and spin and you should pocket the object ball two rails in the corner.

You may have noticed by now that the number two is the corner pocket. I know you cannot actually hit the number two because you would just scratch and your opponent might think there is something wrong with you.

For any shot that is two or less, you have to shoot what I refer to as a "turn the corner" shot. Using your baseline speed and spin, you need to hit as close to the first point of the pocket as you can without catching the other pocket point on the way out. This is a tricky shot on the edge of this system's limitations, but if executed properly it can be done as shown above.

Frank Says:  "Want more information on kicking and banking systems? The Eight Ball Bible has a GREAT section with over 25 pages on the subject."

Remember every table can play a little different. When you practice this system you will quickly learn how to make adjustments when playing on a table that is foreign to you. Rails sometimes play short or long depending on their age, make, etc. there can be many variables when kicking. Using a system is not a sure fire way to make the ball, but it will get you an educated guess that you can use as a baseline from which you can make adjustments.