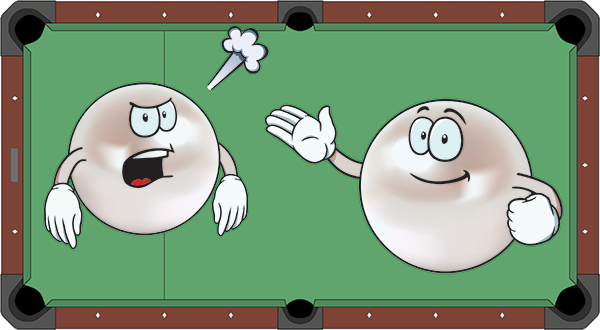 Have you ever been guilty of being a bad loser?  I think we all have at some point, But when that anger starts to boil up inside you, and the thoughts of “how did I lose to this guy?” or “This guy doesn’t play as good as me, he doesn’t deserve to beat me! He got so lucky.” Just think back, were we not all lowly beginning players once? Nobody to my knowledge was born the best player in town.  You worked really hard on your game to get where you are.  Remember the first time you beat a player you really admired or maybe even feared!  It felt great!  The rush of adrenaline, the warm basking glow of smiles and cheers from your teammates.  So while this thought is fresh in your mind consider this, who are you to steal that amazing moment from someone else? Perhaps they look up to you and your skill as a player.  They certainly won’t beat you 10 out of 10 times, but they did this time.  Treat them with respect and encouragement.  Treat them with the golden rule of pool!  After all, the acknowledgment of their accomplishment from the player they look up to is truly the victory for the beginner player.  I know it was for me.


With all that being said don’t forget to be a gracious winner as well! Being gracious however does not mean that you have to apologize or stroke the other guys ego because you won.  “Winning isn’t everything” but it sure is the goal of you are putting in the effort, so be proud of your achievement.  Just don’t gloat.   If your opponent is upset over his loss, be sympathetic to situation and show some tact, after all he may not be as enlightened as kyou are about being a gracious loser.  Some over zealous opponents like to give a complete recap of all the things that both players did wrong during the match, and how it could have been different.  This is usually not your opponent trying to insult you, it’s merely a defense mechanism for their ego. “boy if that ball hadn’t rolled off on me, I would have run out and won the game”  I find if I simply agree with them and leave it at that, most things don’t get out of hand.  If your defeated opponent seems in good spirits and is of a lower skill level, again point out the good things they did in the match.  Let them know what they did right and offer advice to help them improve the things they did wrong.  Like I said earlier most if not all pool players love to get free advice to better their games, as well as having a more skillful player compliment them on the parts of their game they have worked hard on, just like you once did when you were at their level of skill.


So just remember folks, were all on the same journey.  Some take different paths, others have found short cuts along the way, but occasionally we cross paths as we move on our journey to being better pool players, so play nice!


Until next time
Mikey V.