Let's talk about the equipment first. So I have in my hands a normal playing cue. So you can see the lengths. Valerie is holding a normal jump cue. So this is my standard jump cue. A jump cue is lighter and shorter. 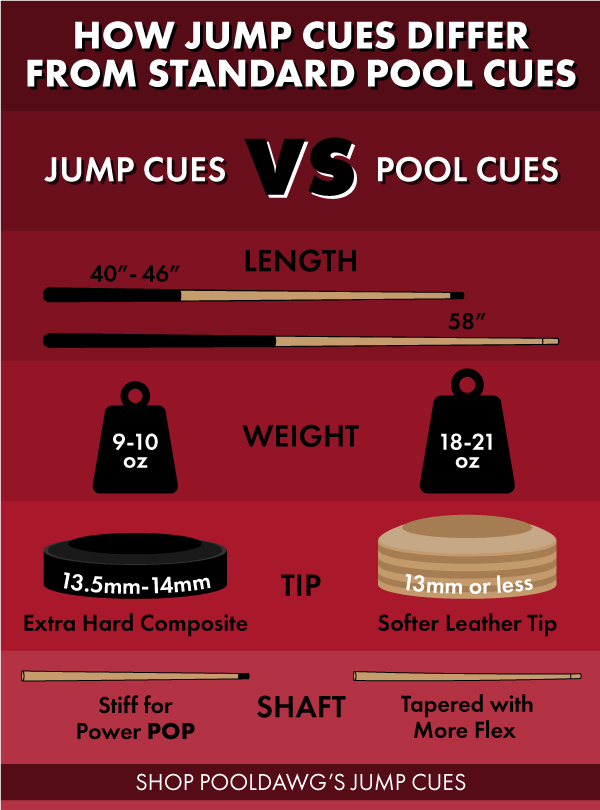 The wood in the shaft is also very hard. This is a hard maple here, and the tip has got to be very hard. In this case, we have a combination of a ferrule and tip that's like a G10. So it's a very hard material. The harder it is on the tip and the shaft itself, the easier it's going to jump.

Now that we covered the equipment, let's talk about contact points. To get one thing out of the way right away, in order to hit a proper jump shot you do not need to go low on the cue ball. That means definitely not a scoop or anything like that. I'm going to use the rail as an example here. 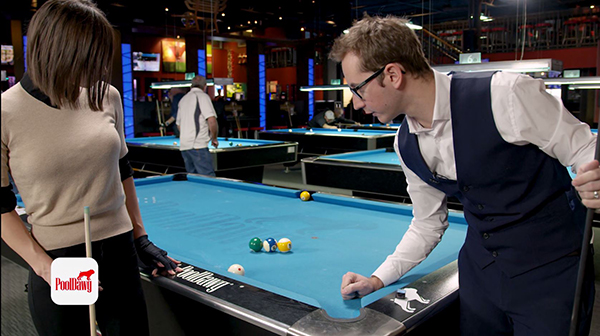 Even if your cue ball is right here, you can still contact the cue ball and doing proper jump shots. So in this case, it's going to be right above, slightly above the center. We're going to move it back so you can see it. 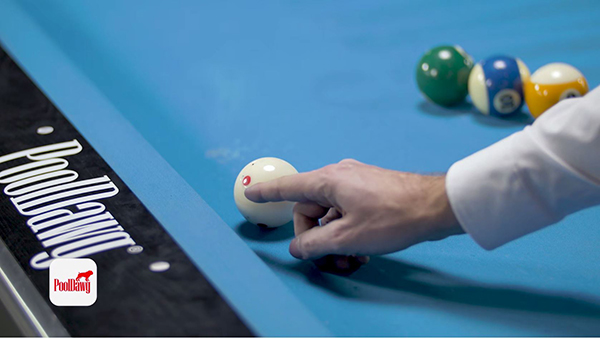 What I did is I set up a pretty easy shot here for Valerie. She's just going to show you how to jump the cue ball over this, into the one ball. So she's going to hit just right there, right above the center. 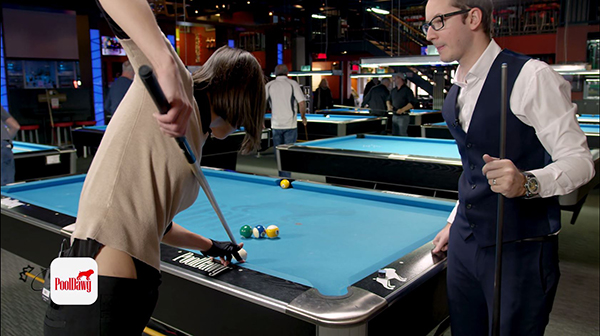 The proper jump shot techniques. So that's the question I get a lot and I think there's another big misconception again here. Most people think you have to hit it really hard, follow through all the way down the table, but it's actually entirely false. To me, a jump cue is an anti-pool shot. Think a short, fast poke. Again, I'm going to use a reference to Bruce Lee would say the one inch punch. It's really just a lot of power in a very short time, just like this. 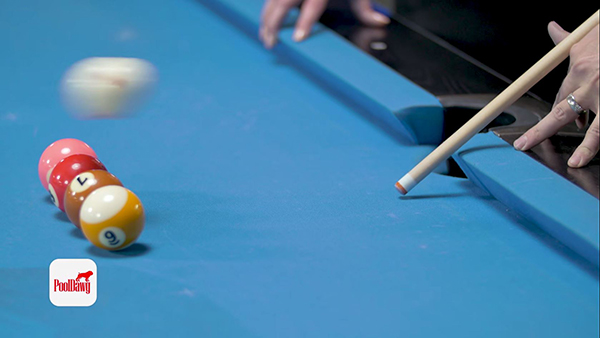 And your physical abilities shouldn't really matter because it's such an easy motion, as long as you have a quick release, you should be good. 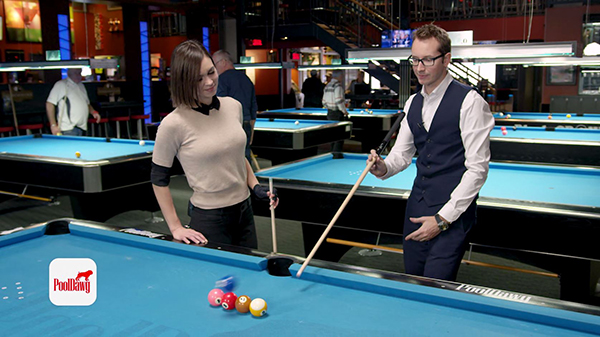 Okay. Now that we covered the physics of the shot, let's talk about mechanics. So first we're going to cover a standard jump shot. So open bridge, Val is going to demonstrate. So strong left hand, open your finger, make sure it's very stable. Obviously was this grip out there. What you've got to make sure is the wrist is also in line like this, nothing like this, nothing like this. About 45 degree, and she's pretty much dead on right there. 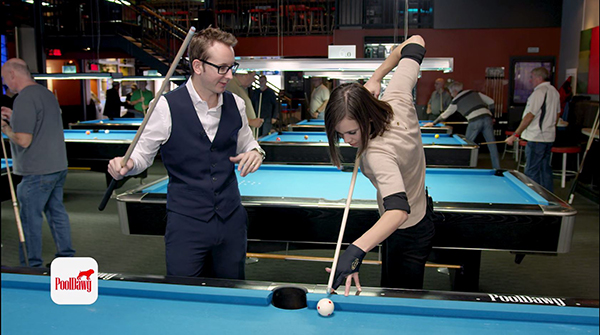 Next solution is a Dart style. So Dart style, same open bridge. But you're going to hold the cue in between the two fingers out there, like she's having. Actually quite perfect there. This is sort of a jump shot used when the balls are closer, or if you have a little difficult jumping, this makes you just clear the ball pretty easy. 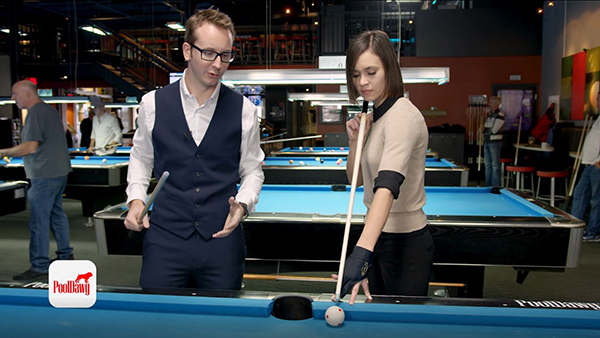 If you have an issue when your fingers are not long enough or your hands a little small, we can also do the floating dart style, which she's going to demonstrate right now. 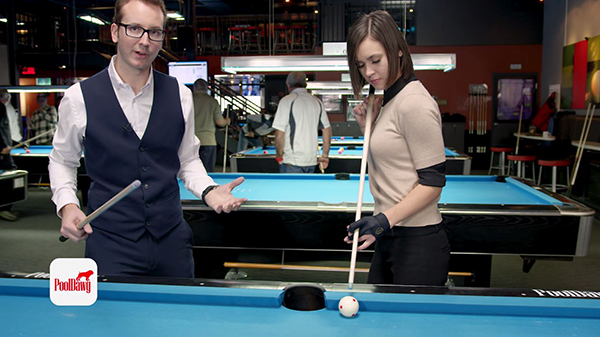 The key here is to put your elbow right on top of your hip and make sure it's pretty solid. And the only thing we might do in here is get a little wider there. The last thing I want to talk about is your right foot. It always helps if you go a little bit wider because you get a little more stable than if you're a little bit too close, like this. 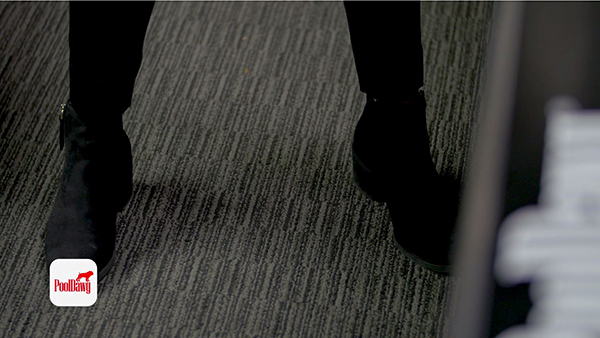 Let's cover some examples now. I'm going to divide them into three categories. The medium jump, because it's probably the easiest. There's short jump, and the long jump shot. Let's start with the medium jump here.

So the cue ball frozen to the rail. Valerie is going to hit just right above center, like we talked about before. Jump over, make the one ball. Short, compact stroke. Let's see what happened. 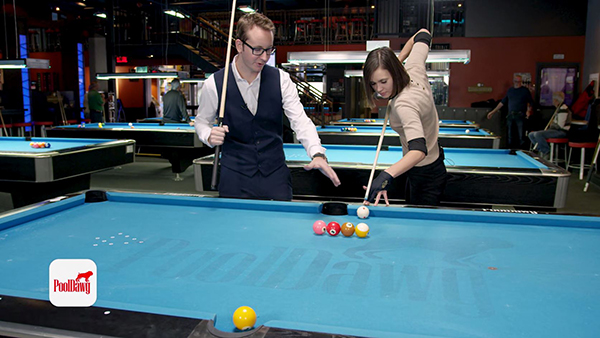 Perfect. Nailed it. So as you can see, this was a pretty decently easy shot and once you practice, it really is a lot easier than people think it is.

Okay. We're now in a short jump shot situation. As you can see, the cue ball is pretty close to the nine ball. Much, much less than the diamond away. So this is a much tougher jump shots. What are we going to try here is jump the cue ball over the nine, into the one ball. So Valerie's going to execute the shot again, probably open bridge. 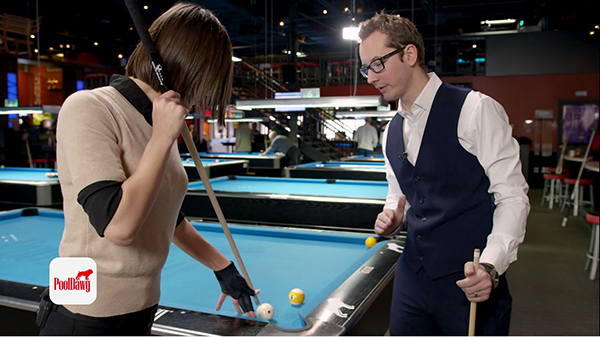 She's going to have to raise the angle, though, so way more than 45 degrees and go a little lower on the cue ball. But still, not much. Important, it's a short, fast poke. 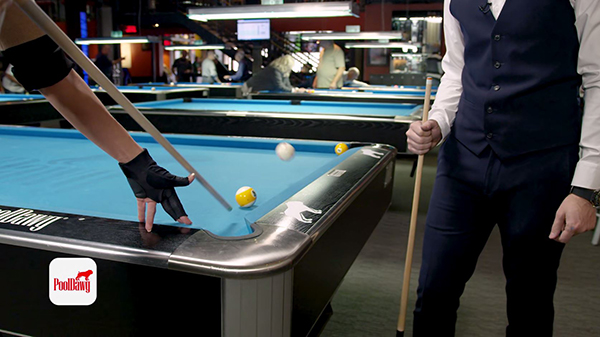 Perfect. Great jump shot. Well done Valerie. So as you can see, this is a little harder, but once you master, it's gets you out of a crazy situation as well.

Okay. So now we'll set up a longer jump shot. As it's more difficult, Florian will do it for you. One good advice we can give you today is always aim fuller.

Yeah. You're going to aim a little bit fuller on the one simply because the cue ball is going to jump when it lands, which means it's going to hit a higher point of contact on the object ball, which is going to result in cutting the ball more left or right depending on which way it lands. So I always like to aim a little fuller. 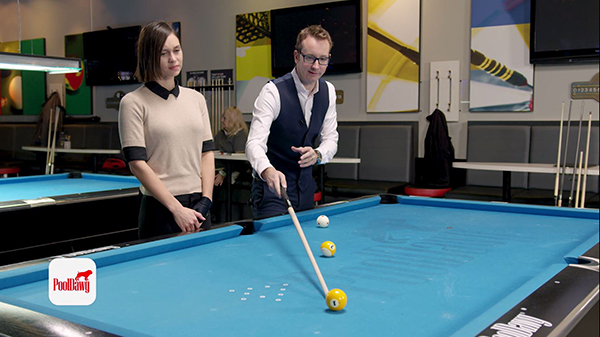 The next thing, because it's a long jump, it's going to be very difficult to land properly. So what I like to do is try to land as close as possible to the one ball and if possible, even directly on it.

Next thing on the long jump shot, a little lower angle. So instead of 45, a little lower. And while it's still a short, fast poke, it's maybe a little more push, a little more powerful. So it's slightly a different stroke. Get some practice, but again, a lifesaving shot. So let's just try to jump over the nine ball here to the one ball. 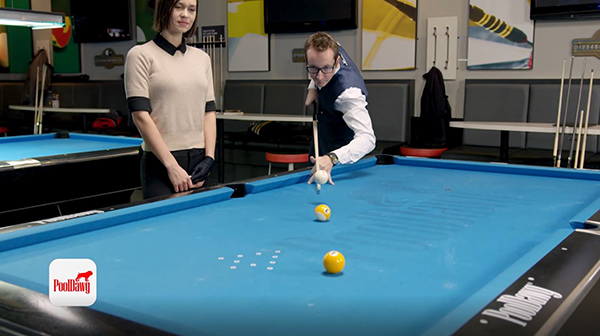 Last jumping situation here, is a really long jump shot. Past a certain point, you really don't want to use a jump cue to jump anymore because it gets kind of out of control. If you don't land straight on the ball, usually your ball is going to bounce and get out of the table. And there is also a ball-in-hand, which is not really what you want to do. 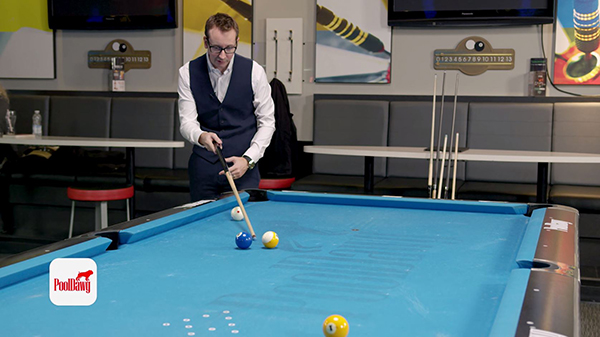 But in this case, however, if you look closely, you're not really jumping a full ball. So you can actually execute that with a simple break cue. As long as it's got a phenolic tip and a ferrule, it's a good break cue, you should have no problem jumping over half a ball. In this case here, we're just going to jump the cue ball in between the nine and the two and try to make the one ball. The good thing is because the cue is longer, you're naturally going to be more accurate and more precise in your shot. 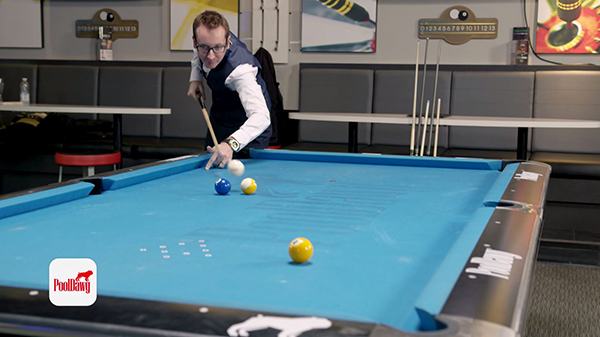 And that's how you do a long jump. Controlled. You don't take too much risk. The ball's not going too high, so you still have a lot of chance for the ball stay on the table. A lot of accuracy. That's pretty much it.

I hope you guys enjoyed these jump lessons. Thank you for watching.

As usual, any questions, please comment below. I'll try my best to answer. And for all your pool and billiard supplies, please check out pooldawg.com. Link in the description. See you guys.