Read any good books lately? When it comes to learning how to play pool, there are lots of options.

New pool-instruction books tend to sell well for six months or so, then drop back, but some stay at the top for decades. In the top five for the last 25 years are "The 99 Critical Shots in Pool," by Ray Martin, (220 pages) which first came out in 1977, and "Byrne's New Standard Book of Pool and Billiards," by Robert Byrne, which appeared in 1978 (without the "new" in the title), and was expanded from 332 to 406 pages in 1998. A fixture in the top 10 since its appearance in 1990 is "Byrne's Advanced Technique in Pool and Billiards," by Robert Byrne. Another steady seller is the little 128-page book now called "Willie Mosconi's Winning Pocket Billiards," which appeared in 1948.

Among the newer titles that are showing staying power among the sales leaders are "Byrne's Complete Book of Pool Shots: 350 Moves Every Player Should Know," by Robert Byrne, and "The Illustrated Principles of Pool & Billiards" by David Alciatore. Other recent best-sellers include "The Complete Idiot's Guide to Pool and Billiards" (352 pages) by Ewa Laurance and Thomas Shaw, "Play Your Best Pool" (442 pages), by Phil Capelle, "Pleasures of Small Motions; Mastering the Mental Game," by Robert Fancher (128 pages), "How Would You Play This?" by George Fels, and "The Science of Pocket Billiards," by Jack Koehler.

So where is an eager cue student to begin? The Billiards Digest columnists have some suggestions. There's something for everyone, whether you want to sharpen up your basics, or fine-tune your straight-pool game.

The BD experts consistently pointed to Ray Martin's "The 99 Critical Shots in Pool," as one of the best instructionals. Billiard historian Mike Shamos placed it near the top of his list, and noted, "A highly underrated book, essentially the first straight-pool instructional manual and really the first good pool book after Mosconi's small 1948 book. Martin's book shows crucial straight-pool shots that had never been diagrammed or explained before. It is very useful even for 9-ball players, though it deals only with straight pool. It has very clear diagrams and explanations and is a gem." 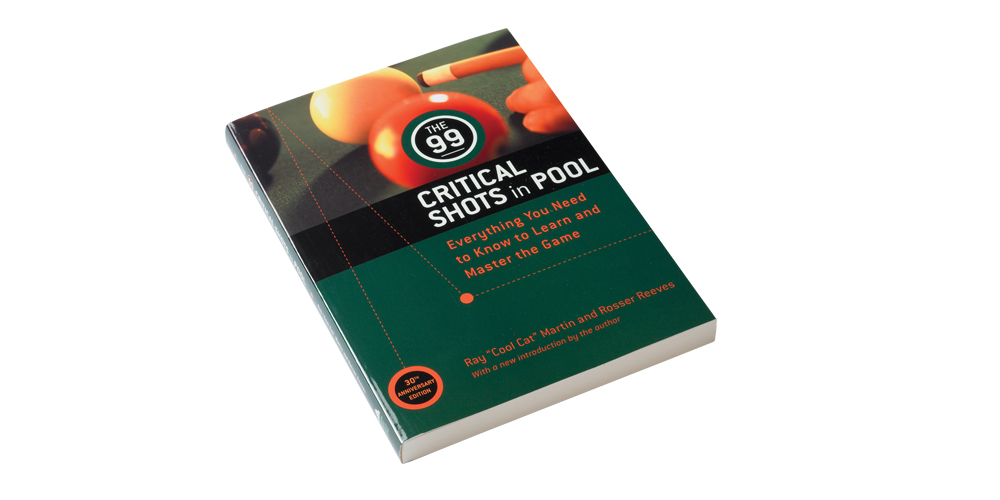 Robert Byrne, himself one of the most-often sited authors in our survey, praised Martin's volume as well: "You can't argue with success. Players like this book despite too many exclamation marks by Martin's writer, the late Rosser Reeves, and a few technical mistakes (like the claim that to run a ball down a rail past the side pocket it is necessary to hit the rail and ball at the same time). Almost a fourth of the shot examples are related to the game of straight pool, at which the author was a great master. No 8-ball or 9-ball examples."

Hall-of-Famer Robert Byrne is one of pool's most prolific and best-selling authors. "In 1977 and 1982 came two of the best books ever written on pocket billiards: 'Byrne's Standard Book of Pool and Billiards' and 'Byrne's Treasury of Trick Shots in Pool and Billiards.'" notes Willie Jopling. "Both are well-written with beautiful diagrams showing overhead views of the shooter - something that hadn't been done before."

When Byrne's first book was published, BD instructor Ross switched to it immediately as the textbook for the course he was teaching at the University of Illinois. "That was more than 25 years ago and, if the course still exists, I would bet that the current instructor still uses it. A wealth of information with clear and concise explanations. And, where else can one find quality instruction for both pool and three-cushion billiards in one book? It's where I went to learn the corner-five system when I took up billiards."

"Play Your Best Pool" by Phil Capelle - "This self-published labor of love is the most comprehensive book available on pool in English," declares Byrne. "With so many examples and variations, casual students may have difficulty sticking with it. Still it's a notable contribution to the literature."

BD instructor Bob Jewett agrees: "Clear explanations of all the mechanics and game situations a beginning player needs to know. If there's a flaw, it's that the tome errs on the side of completeness and wordiness."

"Daly's Billiard Book" by Maurice Daly - This 90-year old book was at the top of Shamos' list: "This is the clearest explanatory book on billiards ever written. It went through a host of editions from 1913 until the 1930 and is still in print. It deals with the most popular game in the U.S. at the time, which was straight-rail billiards, a game with a multitude of positional issues requiring planning, many different strokes, precise control of force and the need to manipulate all three balls precisely. It also delves into the intricacies of balkline, the only English-language book to do so in any detail. A masterwork. Daly was U.S. champion in the 1870s and had a long teaching career that lasted until 1932. He even made some short-subject movies before his death."

Jewett agrees: "Available as a Dover reprint, this has been one of the best billiard instruction books for nearly 90 years. It covers simple ball-to-ball billiards on the pocketless table, but if you master the information here, your safeties and position will be 100 percent better."

"Winning One Pocket" by Eddie Robins - Two experts who know a thing or two about the road gave the nod to Eddie Robins' "Winning One Pocket." Said 8-Ball impresario Larry Schwartz, "Eddie put more great players in one book than I've ever seen. With each situation, you get the different views of a number of top players. After you read this one, you will really know you got your money's worth!" Jopling notes, "Worth its weight in gold for the pictures, stories and diagrams. I studied this, and his other book, Shots, Moves and Strategies, front to back, several times."

Shamos pegged this manual in the middle of his list. "One-pocket is an arcane game of strategy, imagination and finesse that had never been treated in writing before Robin's book in 1993." says Shamos. "He produced what I consider to be the single most amazing instructional chapter in all of pool writing: in 'Shots from the Past,' Robin interviewed masters of one-pocket and collected positions from actual games going back to the 1940s. The format is one situation per page, usually with three diagrams, a title indicating who was playing whom and where the match took place, then a narrative of how the position occurred and why the master took the shot he did, and with what result. And it has Eddie's unbelievably meticulous diagrams. (Bob Byrne says they show how God would play each shot.)"

"Precision Pool," by Gerry Kanov and Shari Stauch - Says Byrne, "In 247 pages, the authors do a good job of covering nine-ball, eight-ball, straight pool, and one-pocket for beginner to advanced players."

Schwartz noted: "Provides the keys to mastering almost everything in pool." Shamos ranked this one as his No. 8. "What I love about this book are its diagrams, many of which are full-page, including huge views of the cue ball with circles and ellipses showing exactly where to hit it to make the shots. The book is elementary, but presents its material in a clean, understandable and therefore highly accessible way. It also goes into kick shots, which are crucial for 9-ball, and is not afraid to delve into caroms and massés, albeit on an introductory level. The beginner who works through this book will have a good deal more general knowledge of pool than someone who uses a book not in the top 10 list."

"The New Illustrated Encyclopedia of Billiards" by Mike Shamos - Byrne writes of this impressive work: "Not an instructional book, but an essential reference book for anybody with an interest in the game. There is something fascinating on every page, and some of it is instructional."

Says Jewett: "This is essentially an illustrated dictionary, but what a dictionary! Over 2,000 billiard-related terms defined and frequently diagramed or illustrated with art from the publications in which they originally appeared. Updated and expanded from the first edition."

Bob Byrne is one of the most often cited authors amongst our august group of instruction specialists. Aside from his own books, here are a few of his favorite volumes:

"The Complete Idiot's Guide to Pool and Billiards," by Ewa Laurence and Thomas Shaw. This is another book that covers the game from the fundamentals to advanced material. A solid book and not for idiots.

"How Would You Play This? How to Think Your Way to Winning Pool," by George Fels. You can argue with some of his suggestions, but the diagrams provide good training in solving on-the-table problems.

"The Science of Pocket Billiards," by Jack Koehler. If you are going to play pool you might as well know something about the physics of the game. Koehler's self-published book doesn't require a background in science or math and is full of interesting and helpful information. I also like his Upscale One-Pocket, which covers that game neatly and briefly.

Here are some of Ross' favorite texts:

"Mastering Pool" by George Fels. The book is divided into four chapters for the games of Straight Pool, 8 Ball, 9 Ball, and One Pocket. When it was published in the '70s it was the first book to dispense with the fundamentals and move directly into the workings of the various pool games. The systematic approaches offered for managing the table in straight pool and 8 Ball did more than any book before or since to improve my game. The original has been revised and now goes by the title, "Advanced Pool."

"Point the Way" by The Monk. Until this book was published players had no source for improvement with the mental side of pool, which authorities agree comprises a substantial percentage of the competitive game. "Point the Way" gives us access to managing ourselves as players to help us bring our best to the table when we compete. From this work, often referred to as pool's "inner-game" book, many readers get their first experience with the feeling of having their hands on the controls.

"The Lesson" by The Monk. It is very common for players to set aside time for practice only to ask themselves, "Now what?" when they get to the table. Here is a comprehensive practice manual with 165 different shots and techniques designed to focus one's practice on the distinct elements of a complete game. For players who want to improve, but cannot spend twelve hours a day in the poolroom, this book is indispensable for its ability to turn short practice sessions into productive work.

"The Sixty-Minute Workout" by Bert Kinnister. I love instructional material that shows the student how to focus a short practice session and make it productive. Although I haven't viewed this tape or taken myself through the full workout in a few years, I still recall a number of its shots as they turn up on their own in my practice.

Bob Jewett knows the rocket science behind pool. His picks include some basics and some titles for advanced players:

"Pool Simplified Somewhat" by George Fels. This excellent introduction is now available as a very affordable Dover reprint. Topics include stance and stroke as well as some basic game strategy.

For advanced enthusiasts, Jewett recommends: "Byrne's Wonderful World of Pool and Billiards" by Robert Byrne. Byrne covers topics that others don't. This second compilation of his columns includes systems, players and other features that will round out your knowledge as a billiard aficionado.

"Upscale One Pocket" by Jack Koehler. No pool player can consider his education finished without a good course in one-pocket. Koehler takes a scientific approach to the game, and organizes the concepts very well.

"Pleasures of Small Motions" by Bob Fancher. Subtitled, "Mastering the Mental Game of Pocket Billiards," this book is the best on the mental side of the game - it puts the others to shame.