Ask The Master - I'm right handed and just found out that I'm left eye dominant. Is there some way to aim better shooting that way? 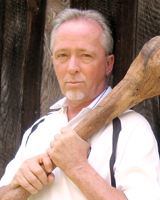 Many players and instructors believe that eye dominance is the Way, the Truth, and the Light about sighting your shots. That you must locate your dominant eye directly over the stick. Not true. Eye dominance gives a good clue as to where your eyes should be relative to the shot line, but not the final truth.

What is "dominant eye"? It's the eye you habitually use to see things that are distant. Your non-dominant eye works more on seeing things that are close. Your brain puts it together in your imagination to tell you where your stick is pointing. We call this your "vision center." 95% of the population is same-eye dominant, meaning their eye dominance is the same as their handedness. You (and I) are in the remaining 5%, the cross-dominant players. Doesn't matter, so long as we get our eyes in the right place, which is different for every player. Some players are so strongly dominant in one eye that for them, shooting with their dominant eye directly over the cue actually is correct. Correct means that for them, what they see as the center of the cueball, for example, really is the center.

Many players have learned to play pool pretty well with their eyes in the wrong place relative to the shot line they believe they are on. In other words, they are not exactly seeing the true center of the cueball or they are not pointing their stick exactly where their eyes/brain tells them they are pointing. And of course, we trust our perception and we get confidence-damaging surprises when our shot results are inconsistent.

Because this problem is so common, and so undiagnosed, probably 75% of the players I see in pool school have it, to one degree or another. I have developed a systematic approach to finding the optimum head position for each player. First, we correct all of their significant fundamentals issues (stance, alignment, grip, bridge, approach, etc.), so their body is delivering the hit stroke accurately and consistently. Sometimes the perception problem goes away through this process. If not, I work with the player to make the final adjustments to their head position and sighting process.

Bottom line: Don't assume you are seeing correctly. Have a good instructor check you out. Makes all the difference in the world when you finally get your head on straight.