Straight to the Point

Have you ever missed the game ball and went home scratching your head, wondering what went wrong? Was it your aim? Did you take your eye off the ball? Did you just panic and "choke"? All of these things are possibilities, but if you felt like you were correctly aimed and missed anyway, it could be your stroke. After 15 years of playing pool someone pointed out that I had a small steer at the end of my stroke on certain shots. In other words, I aimed the ball correctly, but made myself miss by guiding the ball instead of following straight through.

One of the best instructors in the country once told me, "If you've been playing more than 5 years, your aim is as good as anyone on the planet. Efren's not going to out aim you, he's going to out shoot you." I guess what he was saying is that the best players in the world have the straightest strokes. With that in mind, here is an excellent drill to get your stroke smooth as silk and moving in a straight line. I call it the straight in drill, and it's the drill I've been using to try to eliminate my own bad habits. 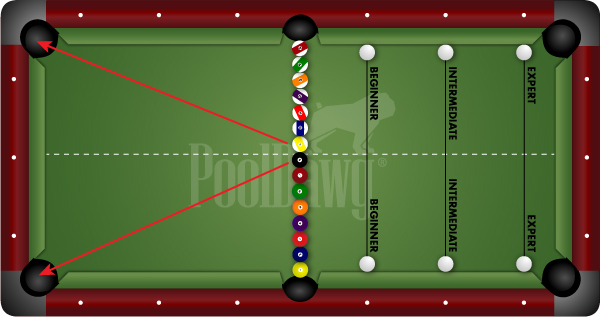 This may sound easy with ball in hand but it's still very challenging, even for the best players. When I'm training for an event, this is my go-to drill for getting myself in dead punch, and it's also the one I turn to when things are feeling wonky. Although every shot is not straight in, your cue still needs to move on a straight line through the target, and that is what makes this drill so powerful. Now that you know your aim is as good as Efren's, it's time to get to work on your stroke.