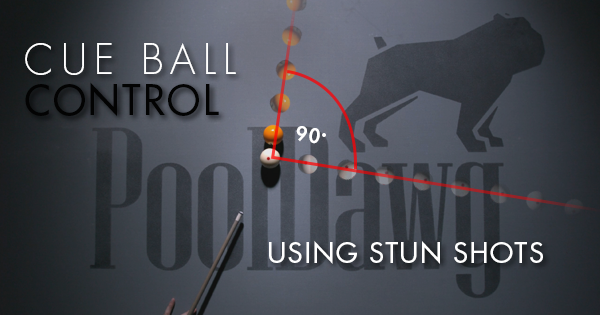 The Stun Shot is one of the most important tools in a pool player’s arsenal. We all know that a stop shot is when a cue ball is sliding (skidding on the cloth) when it hits an object ball full in the face. This results in the cue ball transferring all of its energy to the object ball and causes the cue ball to stop at the point of contact.

A stun shot is like a stop shot, except it occurs when a sliding cue ball hits an object ball at an angle. With a stun shot, we know that the object ball will head down the path of the cut angle toward the pocket that you are shooting for, while the center of the cue ball heads down a perpendicular line, 90 degrees, from the object ball’s path.

The next piece of this stun line puzzle is how to use different speeds to get a sliding cue ball! The big deal here is that we can control the speed and the direction the cue ball takes after it hits the object ball. If we can control the direction and speed the cue ball goes, we are well on our way to being a much better player. That sounds an awful lot like playing position!

Looking a little deeper at a stop shot, we realize that we can get the cue ball sliding in a few different ways. We can:

1. Hit the cue ball very low, with a slow hit. Letting the backspin wear off when the cue ball arrives at the object ball with a short stun line.

2. We could also hit the cue ball just a bit below center, but hard. This causes the cue ball to start sliding right away, resulting in a longer stun line path.

To start we will only use three speeds: one, two and three rail speed. As you get better at this drill, start working in half table increments. Keep at this for a while and before you know it, your skill level will improve.

Practice this drill to learn how to control stop shots and stun shots at different speeds. It will greatly improve your game and provide you with a valuable new tool to predict the cue ball path and control the distance the cue ball goes down that path.

Good luck and see you on the road.