Welcome back 14.1 fans!  In this three part series, I thought I would share with you my experience at the 2014 World Tournament of 14.1, held at Steinway Billiards Café in Queens, NY.   The honor and prestige of this event was simply breath-taking!


The first round of this tournament is a round robin format, race to 100 points. My first appearance on the World stage is against none other than “The South Dakota Kid” Shane Van Boening.  As I sidled up to the table to lag for the opening break against the number one player in the world, it hit me that I was about to play SVB in front of a rather large crowd that had gathered.  I think I may have surprised everyone including myself when I won the lag!  SVB would have to play the opening break.  He broke and left me a long tough shot on the 5 ball.  My arm was trembling as I got down over the shot.  It looked 20 feet away.  I took a deep breath and fired.  As I watched the five miss the pocket by an inch or so I realized it might as well have been a foot. The cue ball careened off the end rail and slammed into the pack.  Balls splattered all over the table.  What happened next is a slight blur as SVb put on a straight pool clinic running a smooth 98 balls.  As I was racking what was to be the final rack for him he asked me “I need two, right? It’s only a race to 100?”  “Yes” I replied.  Shane pocketed his break ball with a crisp thud, but just then the pool gods intervened on behalf of my pride and the 14 ball slid across the end of the table and crashed into the cue ball which found a home at the bottom of the corner pocket! (see diagram A)  Shane grinned and we exchanged a few joking comments about how he possibly jinxed himself by asking the score.  I calmly made 3 balls before rattling a backwards cut on the 4 ball in the side pocket and SVB mercifully put me out of my misery.
After the match we joked a little more about what should have been the event’s first 100 ball run.


My second match was against  Scotland’s Jayson Shaw.  I knew right away this was going to be fun. As we were warming Jayson had some rather colorful things to say about, shall we call them “wardrobe malfunctions” with the class B dress code we were wearing for the event.  The match started out a little rocky with me breaking safe and Shaw making 3 balls and missing a routine shot.  I capitalized and made a decent run myself of 4 balls before missing. This level of play continued as we both joked about what a great show we were putting on for the spectators.  Finally we both started to catch a gear and with the final score of 100-70, Jayson was victorious.  We then proceeded outside and had a very fun time talking about football (soccer) with Darren “Dynamite” Appelton & Shane Van Boening. 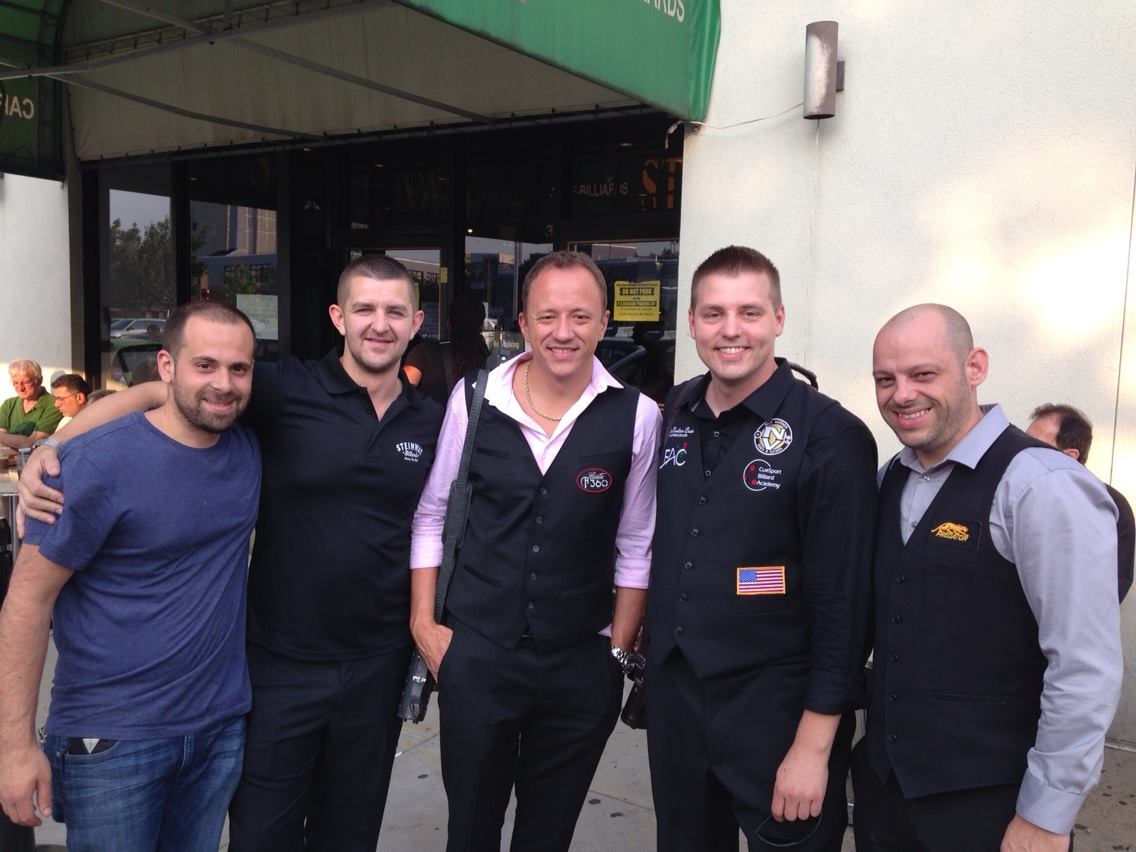 After changing out of my tournament clothes my best friend Tom Gallagher and I headed back to Steinway billiards to watch the action.  I was through playing until the next day at 2pm so we figured to stay up late and have a good time.  Alison Fischer of www.NYCgrind.com offered to be our tour guide and take us into Manhattan via subway for some real New York pizza & visit the infamous Amsterdam Billiards Club. The train ride was exciting and the pizza was great. Amsterdam Billiards gave us the full VIP treatment as players from the World 14.1 and guests of Alison.  We played some 9 ball on the coveted pit, normally reserved for such top professionals and big name celebs.


Join me next time for day 2 & day 3 of this exciting event.