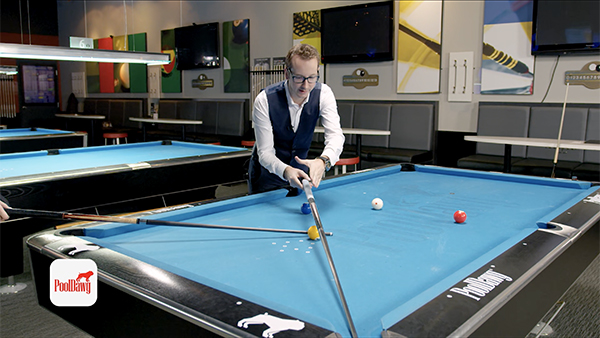 That's where I'm going to be making the one ball, and this is the line the cue ball is going to follow, basically a perpendicular line from the impact of the one ball.

Keep in mind, this is only working if your cue ball is sliding, meaning if you shoot too soft or too hard, this will move the line. If the cue ball is rolling rather than sliding, it will not follow the tangent. 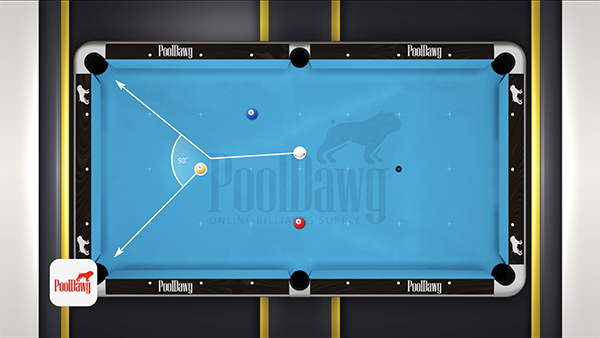 In this case here, we deliberately put a very common shot that I call the “cross shot”, meaning the one goes here and the cueball is going to follow naturally into that corner. We'll let you know in a little bit how to change the tangent, so you do not scratch. But in this case we're actually trying to scratch on purpose.

As you can see, the cue ball followed exactly the natural path for the tangent line, it scratched straight in. Like I mentioned, we'll teach you how to avoid that. Let's look at the two ball now. So the two ball obviously is going to go in this pocket. So Valerie is going to draw the line from the two to the pocket. 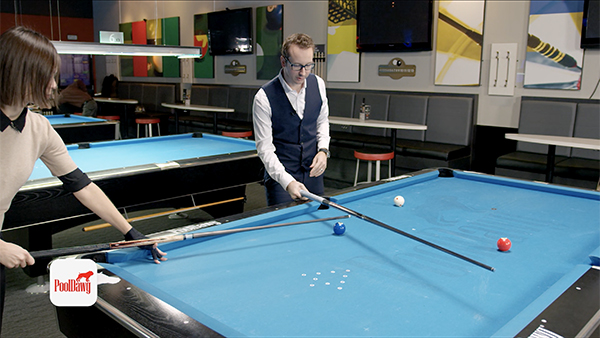 There you go. And I'm going to draw this other line to show you where my cue ball is going to go. So it should be somewhere around this spot. And obviously depending on how hard you hit, it's going to modify the tangents. But in this case, they should be pretty close. So remember it's always a medium shot. 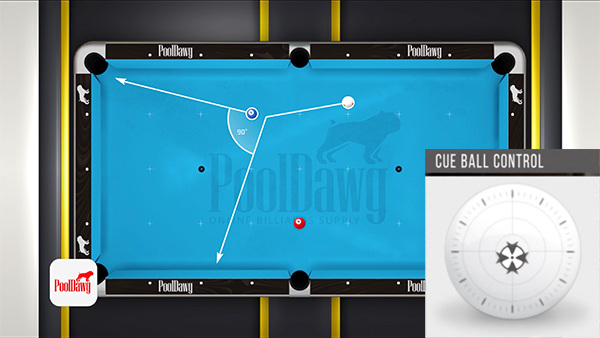 So we ended up exactly where we said, right there in this zone and let's try to identify another tangent here with the three ball. So I'm going to let Valerie draw the line from the three to the middle pockets and I'm going to go out here and show you exactly where it would go. 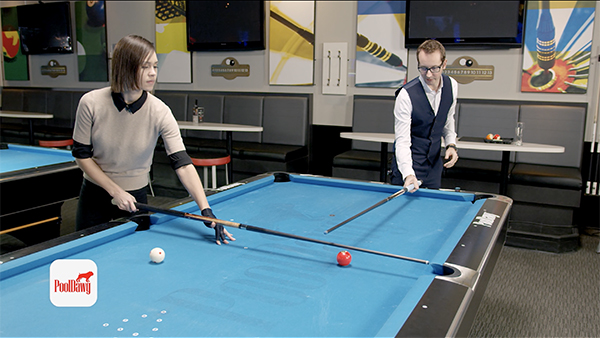 This would be the perpendicular, so we're supposed to arrive around here. So again, remember this is with a medium stroke, not too soft, not too hard. 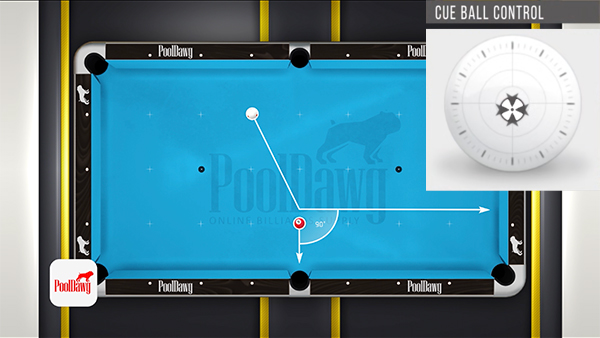 So it went down a little bit, but it's probably because I didn't hit the ball perfectly full. And again this will happen as well so it's probably good I did it. Meaning if I didn't hit exactly the center but more on this side, that would explain why my tangent went a little lower.

That's pretty much all it is for tangents! Just make sure you identify them and always use them to play position for your next shot!

Cheating the Tangent: How Draw and Follow Affects the Tangent Line Path

Let's see how to modify this tangent, or how I like to call it “cheating the tangent”. Same shot- cue ball there, one ball here, natural scratching line, natural tangents rights there. So I'm going to explain you how follow is basically going to go towards this way (end rail), and draw towards this way (side rail), which is natural. 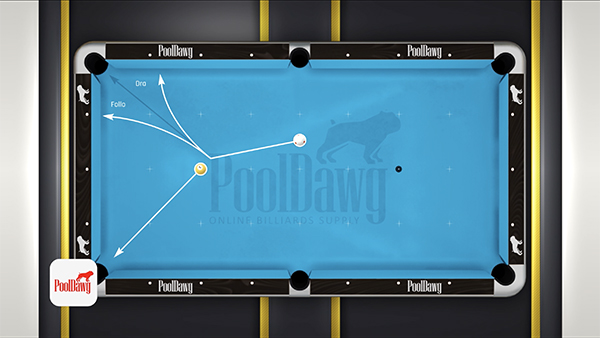 We all know draw comes back and follow goes forward. Now the force is also going to affect that meaning the softer I go, the more I'm going to be there and the harder I'm go, the closer I'm going to be near the corner.

So I'm going to do a few different options. I'm going to use all follow and all draw with different force. Still making the same shot and see where we end up going. All right, so this one is going to be soft follow. 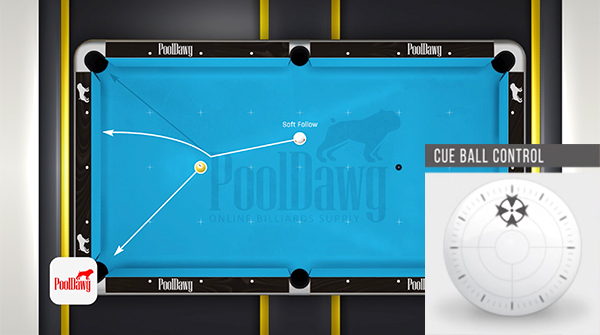 As you can see, because it was less slide, I was able to go towards the center of the table more.

Now we're going to go into a medium follow.

Medium Follow Has a Moderate Path Change BELOW the Tangent Line 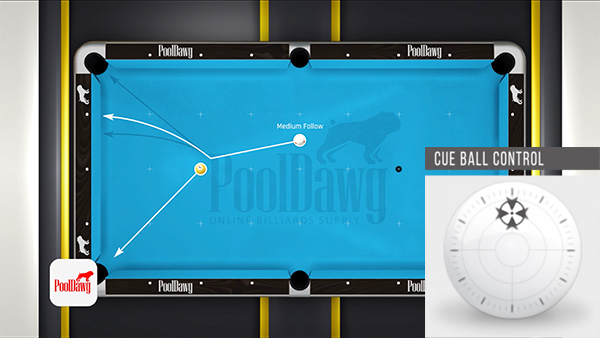 Let's keep going here and do a hard follow. So it is going to be closer to the corner. 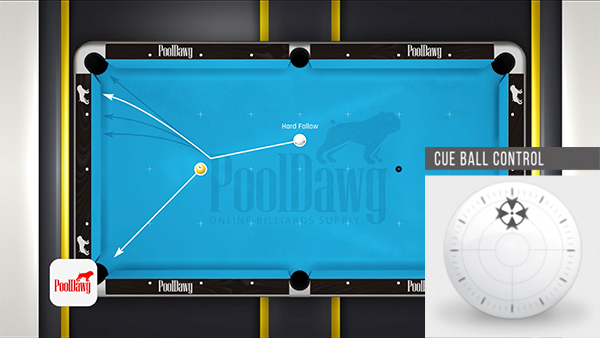 And now let's switch back to draw. So we're going to do this on the four ball. First hard draw. 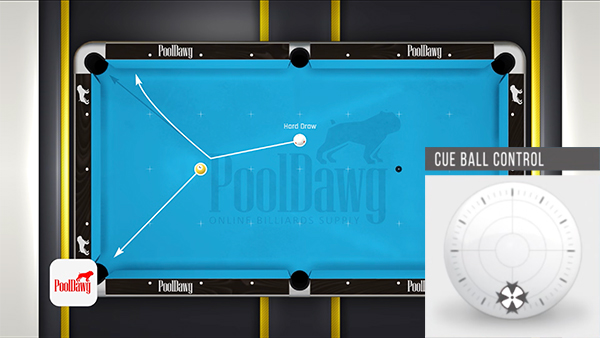 Again, close to the rail out there, exactly like Valerie is pointing. Pretty much really close to the corner. Not exactly the favorable option but sometimes you don't have a choice.

We're going to go to a medium force draw, just a little above it. 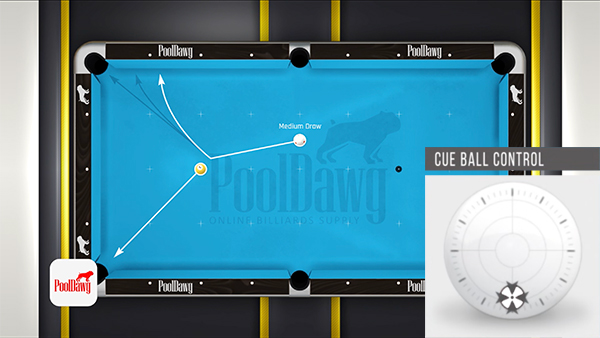 And then the last one will be a soft drive. This is where you got to have the best quality of the shots, and it's probably going to go higher. 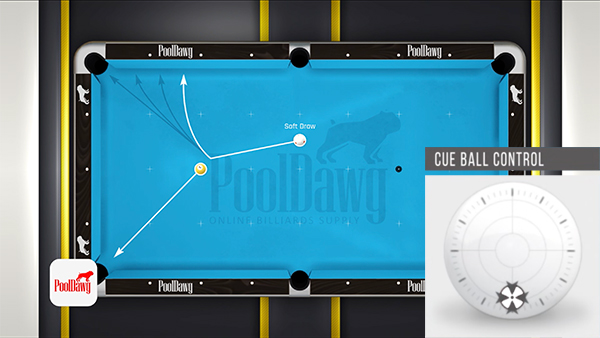 So as you could see, you know it was a wide range of shots from basically here to here, while the tangent is going straight for the middle. So really if you use top or bottom and the right force, you really can manipulate the tangent to your advantage and play the best position for the next shot.

This is cueball drill number one. This one we're going to use only top and bottom. So only draw and follow. In this case we have little markers on the table as you can see there from the 10 ball, which is basically the diamond line and the cueball a little bit away from it.

Control Drill One: Using Draw and Follow to Alter the Cue Ball Path 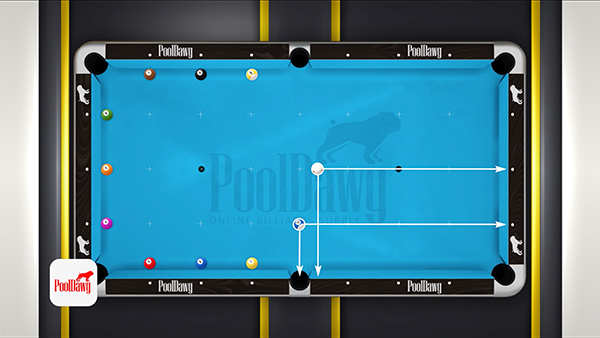 The goal here is for Valerie to hit the cueball into the 10, make the 10 in the middle, and touch the one ball. Once that is done, we're going to remove the one out of the equation and reset the 10 ball and the cueball again, exactly at the same spot. This eliminates all the variables, so she really has to do a different kind of shot every shot here, to just reach a different spot. 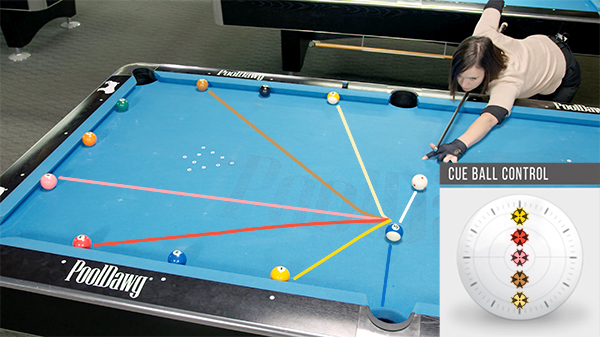 So basically she's going to keep going, then hit the two, then reset. Hit the three, hit the four, hit the five, keep going until the nine ball. So we're going to start with a follow and up to the draw with all the variation in between. It's pretty tricky but I have good confidence in her.

Using Side Spin and Tangents to Play Position

Let's now study the consequence of side spin for your tangent line. All right, so we're going to a little setup situation here again. The cueball is right here, one ball in there. The idea is to hit the cueball into the one, cut the one in the middle and then go up there. So we know the tangent can be bent with draw and follow this way. Now let's see what the side spin is going to do. Again, you've got to remember side spin is only in effect if you hit a rail after impact, meaning you could put as much left or right in here. If you stopped somewhere there, this is not going to affect your tangents, only after the rail.

Okay, so let's first identify where the standard tangent is for this shot, which should be somewhere right there. 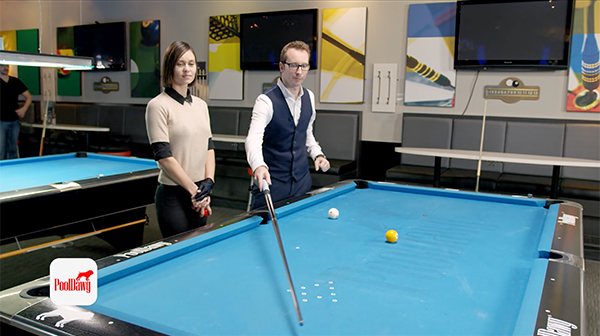 There we go. So this was a natural tangent and Valerie is going to replace the two ball and we're going to try to do a left side spin.

So left English, which should send us here and then make the ball move a little faster. 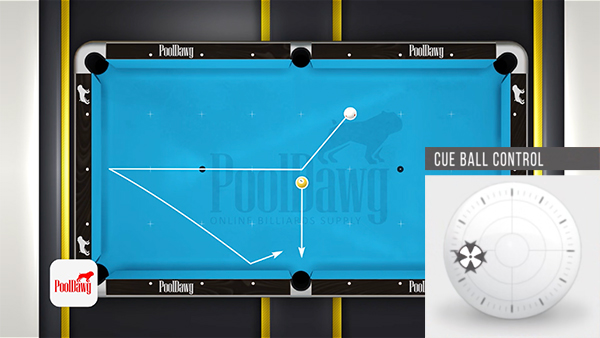 There we go. So as you can see, this ball went naturally two, three, nearly four rails there. When I come back and we're going to do a right English shot. So by now you've guessed the right English is going to send you here, back there, but because it's going against the running English, it's going to be a little slower there. 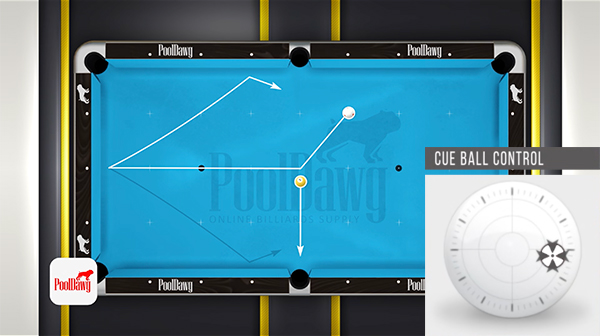 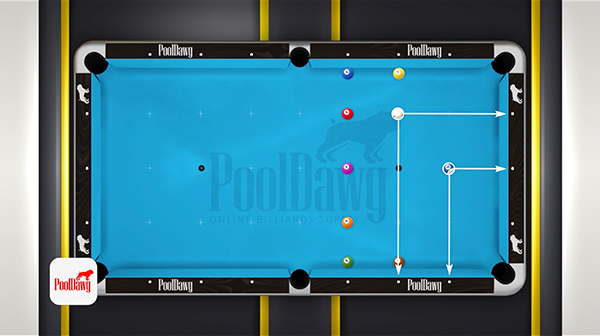 This is drill number two. While the first one was all about the bottom and top, this one is going to be all about left and right English. So we have here the cue ball, same spot and the 10 ball out there in the diamond line. The idea here is you're going to hit the cue ball into the 10, make the 10 go over here, and hit the one ball. 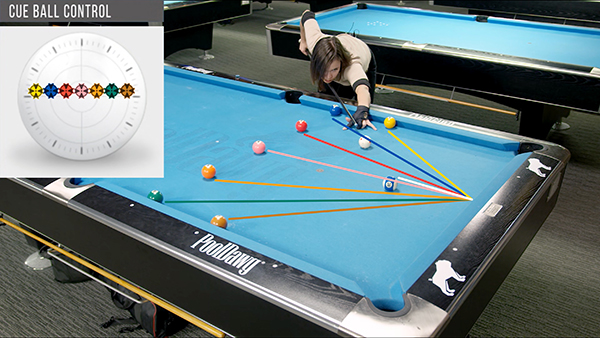 Then you're going to repeat the process into two, then the three, then the four, all in sequence, all in order. In my opinion, this is a tougher drill than the first one. So whenever you practice, don't get discouraged. Just keep it going until you get it. And in the meantime, I'm going to wish good luck to Valerie and see what she can do with it!

How Table Conditions Can Affect Spin and Other Additional Factors

Also, what you got to realize is because the table is affecting play, meaning if the balls are dirty, the table is dirty, it's going to affect the spin a lots. The cueball, it will spin more to the right or more to the left, the dirtier the balls are and the older the felt is. Now if you're doing clean ball, clean felt, it is going to slide more, meaning the spin is not going to affect the Cueball as much, it is going to slide more towards your natural tangents. So always keep in mind all those parameters when you try to cheat the tangent because it's very important and what works on one table might not work on another table the same way at all. Well that's it for the two Cueball control drill. The real question here is what did Valerie think about them?

Valerie:
Actually, I really liked those both drills. It helps me a lot to identify my weaknesses.

Valerie:
So yeah, I think cueball control is really an important part in the game.

Yeah. I think you'll find that it's going to be the same for most people. Usually most people have no trouble with a few shots and then come one or two and then you just can't seem to make it. So it really helps you identify what part of problem you have in your game, and what you got to work on. As usually now, I'll say go to table, get some practice. Any questions, please comment below. Let us know what you think. We'll try to best to answer. And if you have any pool and billiard supplies request, just go check out pooldawg.com. They have everything you need.