Luck of the Draw: 10 Tips For More Backspin 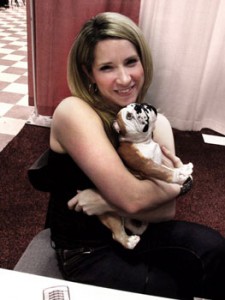 Few moves in pool can draw (pun intended) as much attention, or even envy, as the simple application of backspin to the cueball.  In other words, “Did you see that guy?!! He just drew the cueball the length of the table - I don't wanna play him!”  Does it take super-human strength? Nope. Talent that's present from birth? Negative. There are a couple of fundamentals to keep in mind when learning this pool standard, but like anything else – true mastery comes from practice, practice, practice.

2. Learn to observe.
For this step you could use that fancy “as seen on tv” cue ball with the 6 red dots but that is not necessary. Just start by shooting a striped ball straight into the pocket without using the cueball. The trick here is to put the stripe horizontally and view how much backspin shows up when you hit low. Eventually, you'll see where the backspin stops and the ball starts rolling (the “turn over.”). Impart enough backspin to get the striped ball from the foot spot into the far corner pocket without it “turning over” and you'll be building a stroke that'll enable you to put draw on medium-range shots.

3. Low means low... really low.
In order to get maximum draw, it's imperative to cue at the very bottom of the cueball.  This can be a scary prospect at first and you'll probably pop the cueball up and off the table a few times as you get used to it.  Be sure to chalk up, put the fear aside and go for the low!

4. Accuracy is more difficult as you move away from center.
Because there's less cueball to hit when you're way down low, any little departure from the center axis will exaggerate deflection.  To improve your chances of making the object ball, come straight through the cueball, not off to either side

5. Make sure you're cueing where you think you're cueing.
Where you aim during your practice strokes doesn't always translate into where you hit during your delivery.  If you're having trouble bringing the ball back, check your habits by keeping your eye on the cueball during delivery a few times. You might be surprised that you aren't hitting low enough.

Frank Says:  You need to have a really good stroke to maximize your draw! Check out the OB DigiCue to see if you have any quirks that you need to work out. Simply slide it on the butt of your cue and this awesome training aid alerts you when it detects steering, jabs and body movement during your stroke. The Stroke Groover is a bit more “old school” but there isn’t a better tool to help you to stop dropping your elbow. It will train your muscles to stroke the right way!

6. Keep the cue level.
While it's possible to put back spin on the ball while elevating the cue, the draw you'll create pales in comparison to the quantity of backspin you'll generate if you cue low with a level cue.  By jacking up and coming through the center of the ball you're pointing wasted energy straight into the felt instead of turning it into backspin.

7. Different strokes for different folks.
Both velocity and mass are key ingredients to generating power. Your follow-through can be short and snappier (extra velocity) or smoother and very long (extra mass), both work as long as you have a loose wrist, generate enough momentum and cue low enough.

8. Be a Jedi but don't use the force.
Don't kill your action and follow-through by clamping down on your grip hand, trying to get more power. Increased power comes from taking a larger stroke or a faster stroke but it should always come through naturally, with a very loose wrist and grip.

9. Becoming a super hero takes time.
Don't kill yourself trying to draw long shots right away. Build up your draw stroke by increasing the length of shots a few inches at a time from very short to the length of the table.

10. Now that you've got it, learn to control it.
Draw speed is harder to judge than follow so it's well worth any time and effort you can devote to doing draw position drills.  Draw will open up a whole new world of position for you and you may even find, like a lot of good players, that you prefer to use it on the majority of shots.