This week in the PoolDawg Academy, we are sharing an excerpt from one of our favorite instructional books, Phil Capelle’s Play Your Best Eight Ball. In that book Phil breaks down everything you need to become a solid Eight Ball player. Today, we’re going to take a look at a part of bar box Eight Ball that can be a real challenge: dealing with clusters. Let’s jump in! 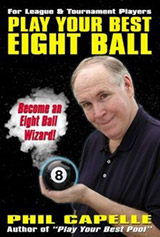 You who are mathematicians (and hopefully the rest of you as well) should appreciate this: when all 15 balls and the cue ball are on the table, they take up 63.62 square inches of the 3,200 inch playing surface of a bar table. Each ball occupies only 3.98 square inches. And yet, amazingly enough, the balls can’t seem to stay away from each other as they tend to congregate in small areas and create clusters. According to my Dictionary of Pool,

Now it’s easy to hate clusters, but bar table Eight Ball is a game of clusters. So from now on, if you love Eight Ball, then you love clusters as well. While these problematic groups can thwart your runouts, they also perform the same duty for your opponents. If clusters didn’t exist, everybody would run racks and Eight Ball would be as fascinating as bowling. Ouch! So we must thank the Pool Gods for clusters. They add interest to the game, and knowing how to handle them gives you a way to rise above your competition.

The Angle of Departure can also be used as a reference line. If the line points below a cluster, you can still break it by adding some speed to the shot. For example, if the stripe, 2, 3-ball cluster was positioned slightly further from the end rail, you could hit it by using a little more speed on the 6-ball shot. You could not, however, break the cluster if it was on the rail next to where the 2-ball now resides.

Breaking Off the Rail

Controlling the cue ball’s path off a rail can be super easy or a major challenge. It all depends on the cut angle and the object ball’s distance from the rail. Cue Ball A in Part A below shows the ideal scenario for breaking off one rail. The cut angle is steep, but not overly so. The 2-ball’s proximity to the rail also makes it easy to control the cue ball’s path. The shot is nearly the same with Cue Ball B, only this time a half tip of follow is required to pull the cue ball into the cluster.

In Part B, the 3-ball is about three inches off the rail. With the cue ball in Position A, it takes a half tip of left english to send it into the cluster down Path C. When the cue ball is in Position B, there is a strong tendency to miss the cluster to the high side shown by Path D. These cluster breaks and others similar to them require lots of practice.

We hope you enjoyed this excerpt! This great book and Phil Capelle’s other offerings can be found in the Instructional Books section of our website.