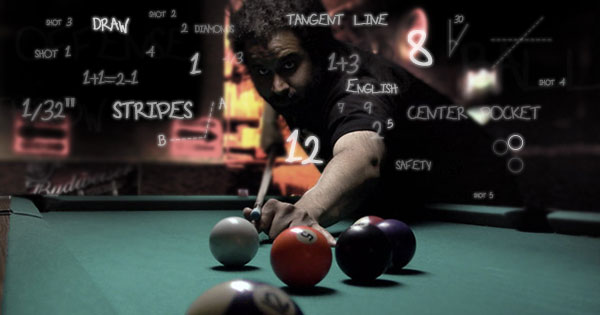 The game of 8-Ball is a fickle little beast. Some days you sit comfortably behind the windshield with the table laid out perfectly for you while your opponent, the bug, toils in the misery of clusters and blocked balls. Other days it's your fate that ends with Windex and a damp rag.

Fortunately, a little knowledge goes a long way in this game, whether it's learning how to maximize your chances of running out a viable table or how to chip away at a clogged table that seems unwinnable. Here are some tips to keep you on the right side of the glass.

1. Keep it on the table after the break.

If you scratch on the break or send the cue ball flying away, your opponent will come to the table with the cue ball in the kitchen (or ball-in-hand) and choice of which suit to play - way too much power to make you lose! Make your opponent earn everything by hitting the break with control.

For more tips on breaking an 8-Ball rack, check out these, 21 Pro Tips for Smashing the Rack.

Counterintuitive to most people's understanding, you earn nothing for pocketing as many balls as you can against your opponent - unless you make it all the way to the win. Your options, both offensive and defensive, dwindle as you have fewer and fewer balls on the table. The worst case scenario is to fail at running out, leaving one or two of your balls behind. A good opponent will either run out easily, since you've cleared away the traffic, or play safe behind one of his or her many balls.

3. Be realistic about problem balls.

Problem balls are balls that are clustered together, either with your suit alone or mixed with your opponent's suit, balls that don't have a pocket in which to go, or balls on which it's very difficult to play position. Many people try to run out while ignoring these balls as if they'll somehow magically become playable. Learn to recognize problems and plan for solutions.

Check out these, Three Cluster Busting Tools to learn some effective tricks to deal with problem balls.

Generally, problem balls become much less of a problem when you can squeeze into a short side position or give yourself the perfect break-out with ball-in-hand. The time for defense is early, even claiming suit and immediately playing safe on a table that's particularly messy. Don't overlook using ball-in-hand to play another safety that solves one of your problems while hooking your opponent.

These 5 Pro Tips for Ball in Hand will help to get you thinking about this crucial tool in the right way.

While playing defense, be mindful of where your object balls end up. Play safe while positioning one of your balls near a cluster or other problem area, giving yourself a future offensive opportunity to play a break-out or difficult position play.

Look for double-duty shots like playing safe while placing one of your balls where it blocks a pocket for your opponent's balls. Just make sure that you leave enough room to be able to pocket the ball yourself.

For more tips on patterns and playing safe, check out the article, How to Up Your Game: Pattern Play and Safeties to learn more about understanding playing proper safeties.

Frank Says:  "One of Phil Capelle's best books, Play Your Best Eight Ball, is an amazing resource to have for you and your team to learn more about this great game!"

If your opponent has a ball in the jaws of a pocket that's blocking all of your shots, consider playing a combination where you pocket the offending ball while leaving your opponent without a shot.

8. Don't start running out until you have a plan for the whole table.

Wait until all of your balls have a viable pocket, or an easy break-out, before you start running out. Think it through and plan a pattern that gets you all the way to the win. If you find yourself in trouble while there are still four or five balls on the table, strongly reassess the situation and decide whether there's a good defensive option. Proceeding further might leave you locked into a losing proposition.

To learn more about how to plan pattern plays for your game, check out the video, How to Up Your Game: Pattern Play and Safeties.

9. Start with the eight ball and work backwards.

While making your plan, aim to shoot your last shot so that it leaves you with an easy shot on the eight. Choose the ball that gives you the easiest shot on that ball and so on and so on.

10. Look for the pattern with the least cue-ball movement.

Let the layout dictate your shooting order, when possible choose a pattern that incorporates stop shots and other very small position plays. Don't send the cue ball up and down the table needlessly; work to clear one area of the table at a time to avoid positional and pocketing mishaps that can keep you from squashing your opponent.

Learn more about Taking Shape at the Table to run out more racks.